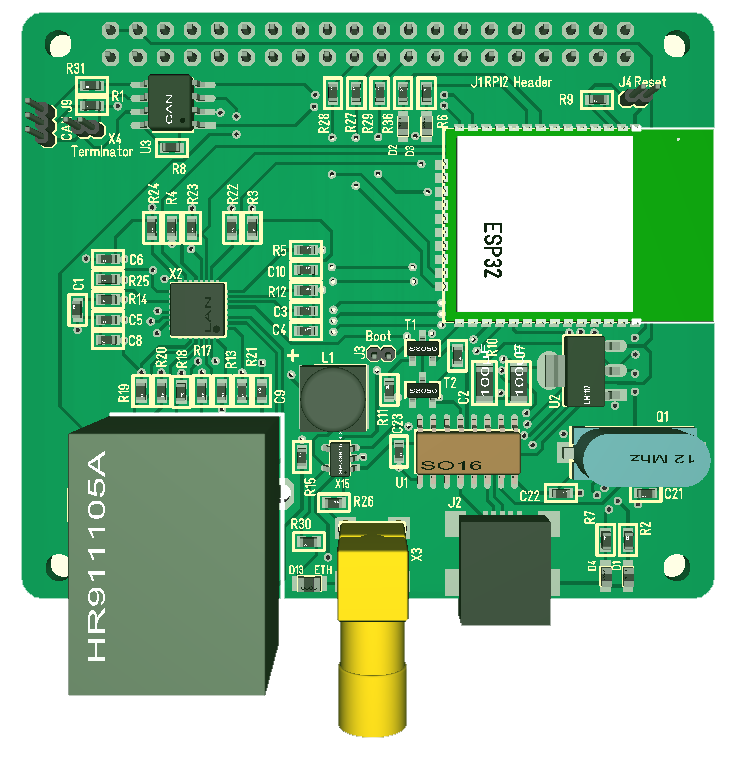 Minor upgrade of the Wifi/Ethernet Hat as I remove the 5V Power connector from all Hat’s. It just occupy space and I really needed to add a shortcut protection if I was to keep it. 5V for MCU will now only be available from RPI backbone or USB only. I already have a separate PSU board + it is easy to add a connector on RPI between pin 4 and 6 for 5V if I want to use a board stand-alone and not use USB. I will do this change on all my boards + add PSU protection on those who need motor power. The objective is to avoid that an entire stack is destroyed by a single mistake mixing up 5V/Motor or PSU polarity.

I just receive an Olimex Gateway Development Board with the main components, it lack CAN and SPI1 but Ethernet is identical and based on LAN8710. I might swap for LAN8720 later, but that is for later. The Olimex have some demo software so I can get Ethernet up running and experimenting.

The 2nd change I needed was that I use an AMS1117 for 3.3V on ESP32 and a SPX3819 for LAN8710 and by mistake the 3.3V outputs was connected. The intention is that Ethernet should be switchable on/off. I am however also a bit unsure about SPX3819 as this feeds 0.5A. I need to verify that this is sufficient.

The 3rd change is that I by mistake added ground plane below over the build in antenna on ESP32. I plan using the external antenna on this, but we should still avoid ground plane over the antenna part. The new PCB is displayed below.

And just to repeat – this board basically replace Raspberry PI for Wifi, Bluetooth and Ethernet allowing an ESP32 to be used in the stack. SPI is connected on RPI bus and can support both Master/Slave and the Half Duplex mode. I have never tested ESP32 on SPI, so it will be interesting. I also have the CAN port. The main difference from RPI is however that I can add several of these boards in the same stack if needed.

I will regardless get the Olimex board working before I order this + I just also receiver PCB for Thunderstick, 12PWM and Sensor Hat, so I got plenty to play with – as if my backlog was not already filled 🙂