I did an attempt of using the 2D raster engine in Qt and while the graphical result was stunning I had to face the fact that performance was not. I moved back to C#/.NET because performance there was better after .NET 4.6.2. With C# I can do 10 x line plots at 40ich frames per sec containing ca 10000 points each.

But, as I recently had to work with and learn QML I also see a different path forward. The latest versions of Qt have started introducing high dpi support as well as dark themes. Working with QML is not straight forward as you get far too little out of the box and doc on how to make things right are difficult to find. But, what I observe is that it performs well on high density graphics using a combination of GPU and CPU. It seems to be worth the hazle of learning it well. 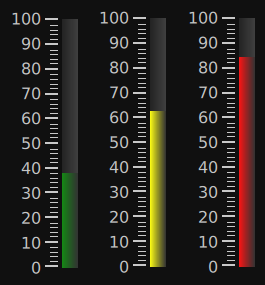 These bars are just an example. The component is called Gauge and looks differently out of the box, but was rather easy to customize. I have done far more fancy things in Qt and C#, but Qt/QML looks very promising.

One very important feature is that a lot of animation and effects are done in GPU, meaning that your CPU is not overrun. And maybe the most important of all – QML promise a path from Desktop to Web, Tablet’s – Smart Phones. I have yet to test the later and QML is not as quick to get started with as others. I will also state that I don’t know QML sufficiently to review it properly yet, but stay tuned – this looks promising so far.