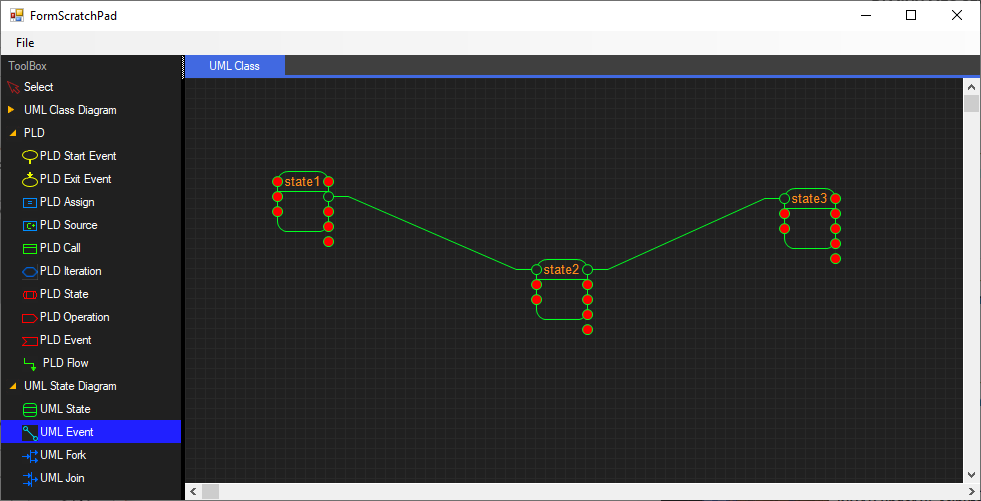 This demo is a bit in the early stage, but I am using C# and .NET 4.7.2 for a simple test. I developed in C# a few years back and was a bit dissapointed over performance. But, I notice that this have improved dramatically with later .NET versions so I am putting it up for a test. What interest me with C# is that the combination of language, Visual Studio IDE and libraries/framework makes it very productive to work with on the HMI side. What have dissapointed me in the past was performance. I have similar demo using Qt and I have to admit that I have not been convinced about Qt performance either.

What I am experimenting with here is a graphical programming language. In this case I started on UML State diagrams. I am not sure if I want to complete this, but I was using UML State diagrams earlier and know it add some value. I simply want to see if this is a path to pursue if I start using this to generate code. The demo you see above was knocked up in ca 2 days work including scrolling/zooming and a lot of the basic graphichs work.

C# itself is much slower that C++, but C# graphics uses optimized C/C++ libraries and I must admit I like the improvements I see.  What actually convinced me is the plot below. This is done in raster graphics with 10 line plots containing thousands of points and update itself ca 27FPS. This is a stupid test to verify if raster graphics are sufficient for my graphical designers.

The difference between C# and C++ is that .NET (that is C# VM) actually have started using more kernals on HMI. So while it is slower at first it seems to get the upper hand because it can use the entire CPU while C++ libraries are stuck with one kernal. I know I can get a much higher performance using C++, but that will require that I put in a lot of work. This is also why I tend to stick to 2D raster graphics – I lack a framework that can do the same on 3D engines without a lot of work first.

One of the drawbacks with C# used to be that it was Windows only, but both Linux, Android and iOS has since then been integrated into Visual Studio. We will see where this leads.