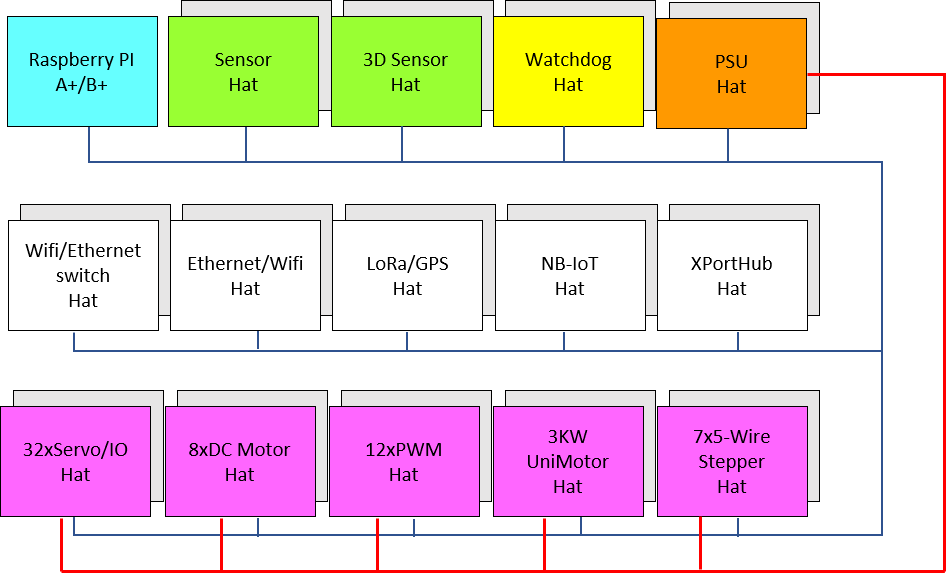 This drawing is an overview of the Hat’s in progress. A few is only on the planning stage, but most electronics is on prototype level and SW is coming on.

Raspberry PI is the obvious core if I need heavier processing. Due to the nature of it’s SPI I can only connect one of these on the same bus. But, it is not given that the bus here must be SPI as we also can dig into Ethernet, Wifi, Serials, CAN, LoRa and NB-IoT.

Wifi/Ethernet Switch is new. I am thinking of HLK-7688, but I need a switch regardless to use Ethernet and Wifi in a system. I will do some experiments this authumn to see if I can achieve something here.

Ethernet/Wifi Hat is on it’s way. This is a simple replacement of Raspberry PI that allows me to add multiple Ethernet/Wifi connection points. Excellent for secondary connections or low cost adaptors. Or well – low cost – the price of a Raspberry PI is hard to beat due to it’s high volume production, so lets see.

LoRa/GPS is on it’s way. I have the first PCB (with errors), but I have not found the time to assemble them yet. I actually considering updating the PCB before I crack on. I am a bit eager to learn more about this technology as it provides free radio up to 12ich km in line of sight.

NB-IoT Hat has same status as LoRa – I have the PCB, but lack subscription and time. I actually need a SIM card w/subscription to connect to the telecom network for this – again a technology I would like to learn more about. If my understanding here is correct I can connect from isolated places to monitor data with this.

XPortHub is made, but I need a revision + I also consider making a variant with Pro-EP10 or similar to get a Ethernet connector. The SW on this is also coming on as this is the project I use to build infrastructure. The plan is to duplicate AL/tools on all Hat’s and start adaptions later this year.

Sensor Hat is on it’s way. This is a Hat offering connections to multiple sensors Analogue, Digital, SPI and I2C.

3D sensor is only on draft level. I have components and need to find time to experiment. This will include GPS, Magnetometer, Gyroscope, Accelerometer, Pressure (Altitude), Temperature and humidity. The target is 3D sensors for motion drones.

Watchdog is new on this list. The idea is a separate Hat that monitor/power on/off the rest.

PSU is 5V PSU feed from higher voltage + maybe I make the watchdog capacity here. Watchdog and PSU are ideas, but not very mature ones – that said it is obvious that I need to find a battery/PSU solution for my systems.

32xServo/IO Hat – I have an older version of this, but have not ordered the new PCB. I need to do a review with focus on the Servo part with some testing. Some pins can be driven by timers, but I do not have 32 PWM channels, meaning that some pins will need software feeding or be IO only. It might be that this is reduced to 16xServo +16xIO etc. To be honest 16 servo ports are rather high density + I can stack these boards up. I also have an issue with these right angle header connectors so it could be an idea with proper connectors that do not fall off etc – I have to look into options.

8xDC + 16xIO Hat is not ordered. Again I have old versions that I want to experiment with first. This Hat might actually be ditched because the 12xPWM can drive 6xDC + I have a ESP32 project that also can drive multiple DC motors if I need more optional space.

12xPWM Hat is on it’s way now. This is maybe the most powerfully motor Hat I have as it can drive 12xSolenoids, 12xPWM signals, 6xDC Motors, 4×3-phase motors or 3xSteppers with current sensors.

3KW Universal Motor Hat. My 160 component steam-punk monster. My wife named this Steam-Punk Driver due to the thick cobber wires. I have to admit that I have assembled, switched on PSU power that works fine and hidden it for a boring day The driver is so powerfully that I lack a project/usage for it. But, the 3KW Thunderstick targeting 3-Phase motors is on it’s way + I am waiting for a new motor. I actually have a 3KW motor, but I need mounting for it + hrmfff PSU to test. The 3KW UniMotor will be completed because I like that project, but I fear I lack project for it.

7x5Wire Stepper is assembled and tested. Motor code is ready, but it needs a new PCB with minor fixes and AL infrastructure so it can go into a system. This is dedicated the small 5-wire steppers that cost ca 1.- USD.