This is an early draft of a new, scalable control system for the PnP and later CNC machines. It is based on my own PLC system. I will re-use an older 3D Print control system or even get a OpenPnP control system in the first place, but I want to replace it with my own a bit down the road simply because of scalability and because this is an excellent test case. Using a modular PLC will in most cases never compete with a all-in-one control system in cost, but it offers doers an option to plug & play and make their own systems without digging into complex electronics and firmware as part of the prototyping. 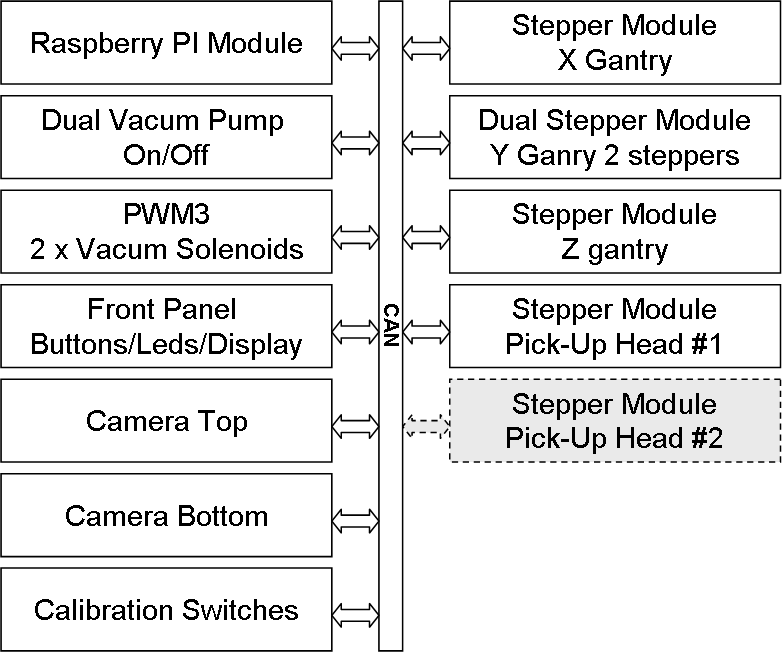 CAN is a much better IPC than RS485 on machinery because you can have multiple nodes that communicate simultaneously as one system. The design here is to use a Raspberry PI with Displays, Keyboard and Mouse as a top-side for the PnP. The Raspberry PI Module will interface Raspberry PI to the internal CAN.

As for Vacum Pump I plan to re-use the more expensive unit I have so the only interface here is a relay switching 230V mains on/off. I have the alternative cheaper pumps as well.

To control Vacum on two heads you need vacum solenoids that are driven my 6-12V signals. My PWM3 module is perfect for this.

As for Front Panel I am undecided yet, but I will need an on/off switch etc. It is possible that I can switch off power on the system leaving only a low-power module running to check power button etc.

Camera Top and Camera Button is connected to Raspberry PI, so this is on/off and LED drivers – maybe 2 x PWM3 Modues?

Calibration switches is digital input signals. I will need to make a very simple module with protected signals in for this.

Stepper Modules are simple modules with one or two Stepper Hat’s. I will probably make a Single, Dual and Quad-Stepper module. My current PnP have 5 stepper motors since I don’t plan to mount the 6th yet (only single head for now) .

This is just an idea and planning ahead. To actually do this I will need to replace Marlin Firmware with a distributed version – it is very doable, but it will be a bit of work.

As for cost – multiple modules will cost more than a larger single module, but the bauty of this PLC is that I can use both. It is nothing that prevent us from making a larger all-in-one module with everything later and then still be able to expand this as we want. Also – cost of pre-made plug&play modules will always be a cheaper, easier way to do prototyping allowing you to make it work and optimize for cost/volum production after you have a success.