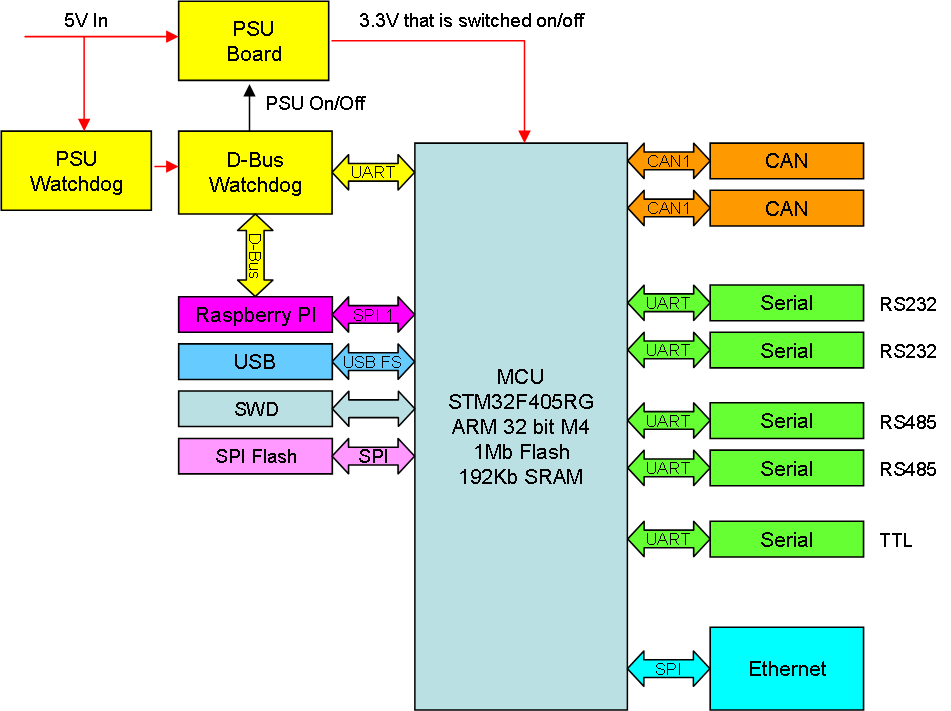 This is the block diagram for XPortHub2 with an added Watchdog/D-bus. My objective here is that I want to add some features to the board and decided to do an experiment adding an external Watchdog/D-Bus by using a smaller STM32 in support.

The principle of a Half-Duplex SPI is simple as you run one clock and read/write data at the clock speed. Using 8 pins means I get 8x the speed of a single-line SPI and can achieve a high data throughput using a lower frequency. I want to test this on my new XPortHub2 and it only require a few, small components added. I probably have to re-route the entire board, but I think this will be worth it.

A Half Duplex SPI at 42Mbs per sec is ca 5Mb per sec – which is very fast. To compete with that I would need to bit-bang in 5Mhz speed. I don’t think that is possible, but 1Mhz should be realistic. Mhz here is Mb since we transfer 8 bits per clock. It is a lot of pins for an experiment, but I need a way for the Watchdog to commnunicate on it’s fun – so lets do this.

Adding a 2nd MCU at top using the bottom layer is doable, but it raises a chalenge – I will either need a breakoutboard for this or move to a 4 layer PCB to avoid interefence. I like the idea of a piggypack board for now – it is a less intrucive change on XPortHub – which by itself is going to require a change later regardless – I don’t expect to make a board as complex as XportHub and get it all right the first time.