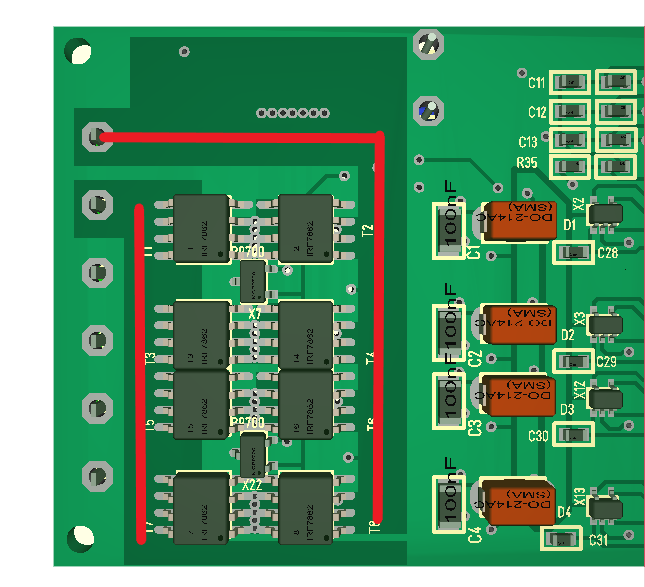 This is the backside of the 30V x 20A Motor Driver and the red lines are the main power paths. The lower left one is the + path, while the top, angeled is GND. The later will be merged into ground plane so it get a bit extra help. But, these are the paths I expect to be the weaker links that will limit total power on the driver board. So I want to prepare adding 2-3mm wires soldered straight on the paths to assist. Keep in mind that every channel here is rated 30V x 20A, so if we use 4 channels individually we could push 4 x 20A = 80A. It is no way we can sustain 80A, but if we run 2 x DC motors the extra lane support could give us 2 x 20A ++.

As I said – this is a free option as I just have to open those lanes for soldering to make it easy to strengthen those paths. I will also add that the heat-sink and 2mm thermal padding comes straight on top here basically cooling the PCB directly, so it will be interesting to see what I can get out of this one. These lanes sustained 10A no problem, but that said – it’s a huge difference between 10A and 20A. Once you hit the point where the PCB starts heating up it goes fast.