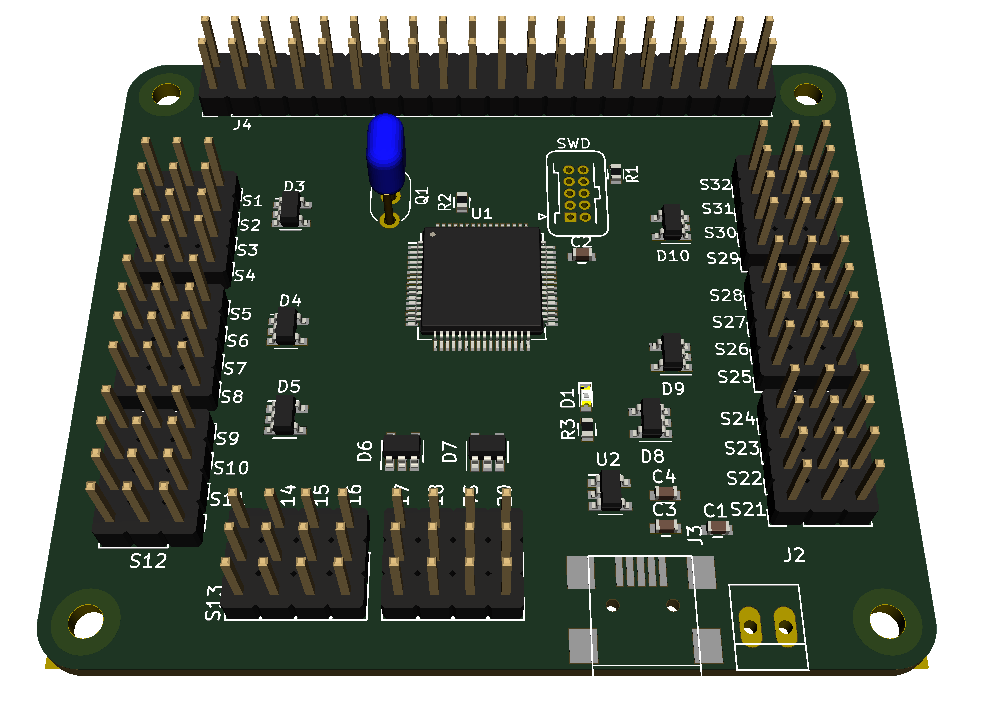 This shows and early draft of rev 1.4 on KiCAD using their normal 3D model. KiCAD have a more realistic version that is a bit slower to draw, but for all poractical purposes it does the job. Accurate details is IMO not important here, the objective is to verify as much of the mechanics as possible. KiCAD enables export of images directly, but I ended up using my old trick of taking a screenschot and use Paint 3D.

What I am really happy with here is the PCB layout. Some things are a bit new and different yet, but the more I learn KiCAD the more I like it. on some features I seems to have less manual control than before, but all in all – setting this up was more about learning KiCAD than work.

As you can see I lack 3D model on 3 footprints + I have the wrong footprint on the crystal – I have yet to learn how to create my own 3D models and footprints. But, I am happy to see that the libraries contains far more + you get libraries from various sources. And yes I know – I am using straight headers rather than angled headers because I did not find angled headers 3 rows deep. I am not even sure if I actually used the correct tool for drill holes as what you see is a gigantic “via”, but I will get there thanks to hundreds of videos assisting me.

One of the tools I really appreciated is the measurement tools and aids on making correct dimensions – that was not existing in Target 3001.

Operating KiCAD feels like doing Schematics, PCB and 3D in one integrated tool. I know it is different tools, but once set up the next step is only a button away. It is a few manual steps between schematics and PCB to give you full control and I must admit I like having schematic symbols separated from footprints giving me options to replace footprint with a minimum of changes.

As for PCB routing – You have to remember that I started my carrier as Electronic Engineer back in 1978 using pen and paper to make schematics and PCB layout. Actually using a CAD tool is like putting someone used to a horse carry into a formula 1 car. Target 3001 impressed me, but getting used to KiCAD is like dropping into the cockpit of a jet-fighter. It’s semi- automatic routing is very impressive in terms of how fast you route. And just for the record – I have used Target 3001 for 4 years and KiCAD for 1 week. I still like Target 3001, but it is no match for KiCAD once you take the time needed to learn it’s user interface. And to remind you all – KiCAD is free, open source. It is C/C++ code with wxWidgets.